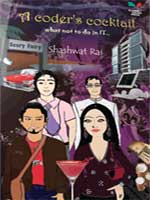 We have all read about what not to do in the IITs, even watched the blockbuster movie on what not to do in normal engineering colleges. Wonder why no one told us about what to do once you graduate and get in a job, or what not to do in IT? Courtesy to the mad rush of driving their bandwagons to colleges and forming a gaudy circus parade of the best minds in our country, Indian IT is growing at a hectic pace. Most of us are born and branded as engineers. The next dish on the menu for us is a safe job in the IT companies. We think that’s the end, we assume we are happy. But the downstream flow to this ungodly river of perception that once in a job ‘all is well’ is changing fast. Set in times of recession, on the backdrop of the most respected IT company of India, this story will take you on an epic tale of friendship and betrayal, of love and office politics traversing on its way the gloomy shades of today’s youth to the age old struggles of seeking to answer the dark side of being a man. About the Author Shashwat was born in 1983. He has lived major part of his life in Delhi. He is currently employed with a leading IT company at Mangalore. Along with his technical expertise he is also leading initiatives like VOY (Voice of Youth) and Green Connect for the organization. Shashwat’s writing style tends to be florid with a mixture of fantasy and realism. His satires of the boss’s snobbery—the mention of SRK and take on homosexuality—lend a signature to his vivid story telling. Comparing salaries to coconut milk, office rooms to Eskimo huts or a girl to a cigarette are just some of his hailed flights of fancy. His characters’ names provide the reader with intimation in boosting the plot, such as SRK, Gabbar, Charlie anna and Pankhuri. His account promises to capture the everyday youth on paper to which the readers will relate and envision as real people.